Posted on February 23, 2020 by peggylchambers 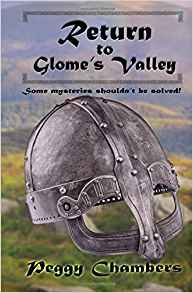 Return to Glome’s Valley is simply that – a return to a magical place of childhood friendship.

Ethan left Glome’s Valley because summer was over, and school was starting. After his adventures in the valley with Glome and the trolls, Ethan had to say goodbye to his new friends and go back to his world. He promised he would be back to play. He never said it would take 14 years. But he did come back, and things were mostly the same as when he was a child.

But the valleys around the Heavener Runestone are magic, make no mistake about it. And there are always new things popping up.

When Ethan finally returned to the valley, his father had passed. So has the archeologist who helped his father translate the stone and find Ethan when he was lost in the forest. But the house where Glome and the fairies lived was still there, though in disrepair. Soon, Ethan learned there were more creatures than he knew about when he was a boy. Trondelag the ancient dragon lived in the pond next to the house, and she was a formidable ally in the war against the trolls.

Another new inhabitant of the forest was Mac – a redheaded spitfire who reminded Ethan of himself as a child. And she believed!

The semi-annual Heavener Runestone Viking Fest is just around the corner https://www.facebook.com/HeavenerRunestone/. Every October and April the runestone park celebrates all things Viking. The second week in April visit the park and its inhabitants. You might just find some magic and it will be a great experience in the year of fewer possessions and more experiences. It is a great way to add to the experience chest just waiting to be filled.

Peggy Chambers calls Enid, Oklahoma home. She has been writing for several years and is an award winning, published author, always working on another. She spends her days, nights, and weekends making up stories. She attended Phillips University, the University of Central Oklahoma and is a graduate of the University of Oklahoma. She is a member of the Enid Writers’ Club, and Oklahoma Writers’ Federation, Inc. There is always another story weaving itself around in her brain trying to come out. There aren’t enough hours in the day!
View all posts by peggylchambers →
This entry was posted in Uncategorized and tagged Dragons, fairies, fantasy, Heavner Runestone Park, magic, Oklahoma parks, Return to Glome's Valley, trolls. Bookmark the permalink.