Posted on January 19, 2020 by peggylchambers 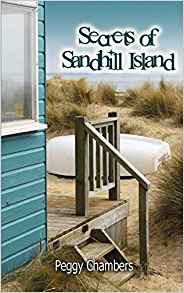 It’s cold outside! In case you haven’t noticed, it’s cold and windy – at least in Oklahoma. I long to take the dog for a walk. I have neighbors who dress up like Nanuk of the North and walk every evening, rain or shine. And they walk fast! They have to, it is cold. They are hardy and determined. Personally, I go to a gym. I attend my Water Aerobics class twice a week and Yoga once (three times a week, not every day like the neighbors) and call it good.

But I long for warm weather, toes in the sand and sunshine on my face. It is January in Oklahoma and that means anything goes. As far as weather, that is true here on the Great Plains year-round.

Since I can’t experience a beach, I’m going to recommend a good beach read. Secrets of Sandhill Island is a beach read with suspense, romance, and hurricanes! Meg doesn’t have to worry about cold weather. Her little garden on the beach will stay warm unless it is blown away by the hurricane churning in the Gulf of Mexico.

Meg’s biggest problem is who is blackmailing her and what secrets do they know about her past? Here is an excerpt from the prologue.

All Evan wanted was to be with Meg. He would provide for her and the child, or children as the years went by. He was still unsure why she chose him – a fisherman – over anyone else in the world, but she did. Her family didn’t like him but, they were just going to have to get used to him.

He struggled pulling the nets in alone. The pulley did most of the work, but it still would have been nice to have some help. The hair on the back of his neck stood up and he sensed the presence behind him. He turned around. The man stood almost close enough to touch. The dark ski mask pulled over his face sent a shiver up Evan’s spine. Where did he come from? But most of all, why did he hide his face out here on the open ocean? And then he saw the giant meat hook in his hand.

“Who are you and how did you get on my boat?” Evan stepped toward the intruder despite the danger. He never expected what came next.

“This is from Graham.” The man plunged the hook deep into Evan’s chest. Blood spurted every direction as Evan’s eyes bulged and he gasped only once. The man in the ski mask quickly pushed him over the side into the dark, churning water.

Secrets of Sandhill Island is beach read with a twist. It is suspenseful, romantic and has a hint of mystery. What are the secrets held on Sandhill Island?

What are you reading this week? I hope you stay warm.

Peggy Chambers calls Enid, Oklahoma home. She has been writing for several years and is an award winning, published author, always working on another. She spends her days, nights, and weekends making up stories. She attended Phillips University, the University of Central Oklahoma and is a graduate of the University of Oklahoma. She is a member of the Enid Writers’ Club, and Oklahoma Writers’ Federation, Inc. There is always another story weaving itself around in her brain trying to come out. There aren’t enough hours in the day!
View all posts by peggylchambers →
This entry was posted in Uncategorized and tagged beach read, cold weather, exercise, gardening, murder, sandhill island, secrets, warm weather. Bookmark the permalink.

1 Response to 2020: Experience a Beach Read and Stay Warm