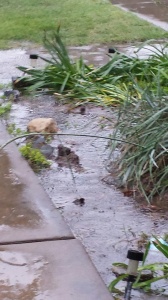 It has been an eventful couple of weeks.  The rain has come down in buckets in Oklahoma and other states as well.  The drought is over.  It rained until I almost started working on my ark.  But not yet.  I am happy to report our flooding is just an inconvenience and not a tragedy.  The flower bed I have been working on (when it wasn’t raining) is a swimming pool.  Toads are strangling.

But the good part of the rain is the time allowed to write.  There is nothing like a cool wet day to bring out the muse.  I made a big dent in my latest work-in-progress.

I attended a beginner’s Yoga class this week.  It had been ages since I practiced Yoga but the instructor at the Y remembered my face (and probably my form).  I still have a hip that hurts when I have been sitting too long brought on by the pose I had to adjust.  I also worked out Saturday morning with the uber talented author Lucie Smoker.  We try to get together on Saturday mornings when our schedules allow. 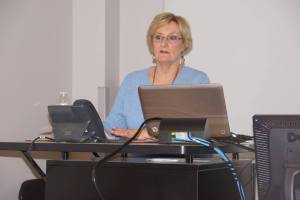 I spent last weekend in Branson at the Ozark Writers’ League workshop where I presented on writing fantasy.  I had a great time and my daughter attended with me.  After the workshop we checked out the Hollywood Wax Museum where she posed with Hef and others.  Those wax statues are creepy real! 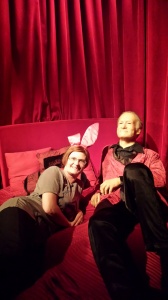 Next week I speak at the Enid Public Library to a group of summer volunteer students and then have two book signings coming up in June.

The little garden is putting on veggies.  I have a tomato and baby peppers. 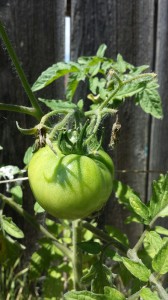 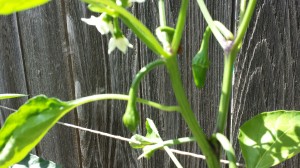 The lettuce I thought would never come up is late and won’t be ready to go with the tomato for a backyard-grown salad.  But it is fun to watch it try. 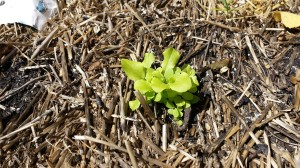 If you live in the mid-west, be safe and don’t drive into standing water.  We have lost enough people and property due to flooding.  Stay safe!

Peggy Chambers calls Enid, Oklahoma home. She has been writing for several years and is an award winning, published author, always working on another. She spends her days, nights, and weekends making up stories. She attended Phillips University, the University of Central Oklahoma and is a graduate of the University of Oklahoma. She is a member of the Enid Writers’ Club, and Oklahoma Writers’ Federation, Inc. There is always another story weaving itself around in her brain trying to come out. There aren’t enough hours in the day!
View all posts by peggylchambers →
This entry was posted in Uncategorized and tagged book signings, Branson, flooding, Hef, Hollywood Wax Museum, lettuce, Lucie Smoker, Ozark Writers' League, peppers, tomatoes, yoga. Bookmark the permalink.