Posted on October 12, 2014 by peggylchambers

Yesterday was the annual Stillwater Public Library Local Author Fair, and I was pleased to be a part of it. http://library.stillwater.org/read_local_authors_fair.php I was amazed at the sheer number of Oklahoma authors in attendance – two floors of them!  I counted 42 authors of all types including a graphic artist drawing caricatures.

I met serious authors with non-fiction books about the history of our state and the Tulsa Race Riots, and not so serious authors with light children’s books and graphic novels.  Twelve year old Megan Pickering (whose parents are OSU grads) has published her first novel, “The Believers.”  I believe she will be a great success as she grows.

A woman with four children came by my table looking at “The Apocalypse Sucks.”  I had one colorful book on a stand that was eye level with a boy of about four years old.  He had a sucker in his hand (and sometimes in his hair) who stared intently at the cover with his nose almost up against it.  He was enthralled (as am I) at the art work by Andy Fish on the cover.  I am sure he was initially drawn to the colors, but stayed to look at the detail of bat creatures and women with knives. The sticky hand never touched the book as he studied it intently.

Melanie (MD) Moffitt writes young adult paranormal novels.  She studied under William Bernhardt’s “Just Fiction Writing Series.” She is a former Psychology major who has now switched to Creative Writing.  She will go far! Our tables were across from each other and we discussed our books and writing over lunch after the event. I hope she visits the Enid Writers’ Club sometime.

Fellow writer John Biggs of Oghma Creative Media was there and my besties from the Enid Writers’ Club, authors Lucie Smoker and Martha Draper, tagged along to support me mentally and physically.  Next time, I’ll drag their bags and they can meet and greet while selling their books. 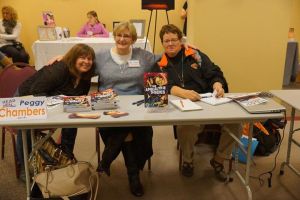 The library did a great job of organizing this year’s event and I hope to be invited back next year.  Thank you Stillwater!

Peggy Chambers calls Enid, Oklahoma home. She has been writing for several years and is an award winning, published author, always working on another. She spends her days, nights, and weekends making up stories. She attended Phillips University, the University of Central Oklahoma and is a graduate of the University of Oklahoma. She is a member of the Enid Writers’ Club, and Oklahoma Writers’ Federation, Inc. There is always another story weaving itself around in her brain trying to come out. There aren’t enough hours in the day!
View all posts by peggylchambers →
This entry was posted in Uncategorized and tagged Andy Fish, authors, bat creatures, children's books, Enid Writers' Club, graphic novels, John Biggs, Just Fiction Writing Series, MD Moffitt, Megan Pickering, Oghma Creative Media, Stillwater Public Library, The Apocalypse Sucks, Tulsa Race Riots, William Bernhardt. Bookmark the permalink.