Posted on October 4, 2020 by peggylchambers 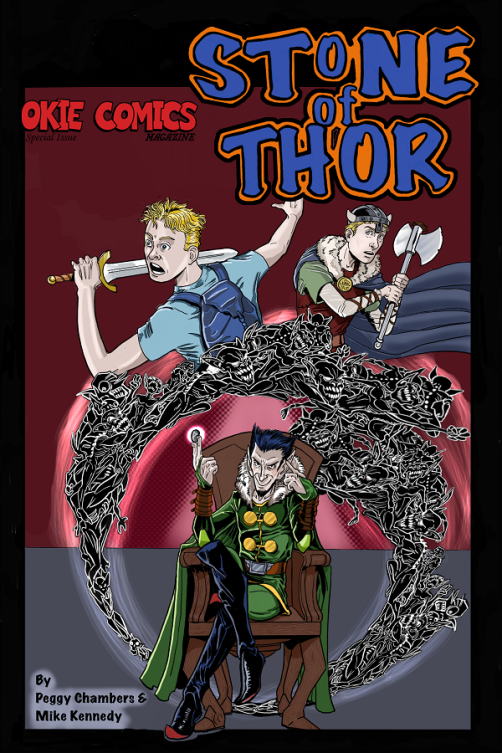 I got a box of my first comic books this week and I was so excited to see them in print!

This was a first for me learning about comic book scripts.  I had a lot of help from Jeff Provine at Okie comics and I received a copy of a script from A.I. Jones as a template to try to learn from.

I’ve been in love with the myth of Vikings in Oklahoma since the first time I visited the Heavener Runestone Park.  I’m their biggest fan.  I looked around that forest as a writer and I could see a fairytale.  And I wrote one, Glome’s Valley.  I don’t know if Vikings were in Oklahoma before Columbus discovered this continent for Europe, but they traveled all over searching for land.  Their home was a series of fjords and they needed land to grow crops so they looked elsewhere.  Some believe that the carvings on the runestone are a date, other’s say it was a Viking marking his territory – Glome’s Valley.  But I think the forest is magical and so I wrote my own fairytale about it.

After the two Glome books were published I met Jeff Provine at the Author Fest in Enid.  He publishes Okie Comics – Comics by Oklahomans, for Oklahomans. We talked about my books and the story set in Oklahoma and I decided to write a short story to go with the books.  Then he suggested I write the script from the short story.  Augggg!!!  Okay, I decided, I’ll try.  I never would have made it without his continuous support, but the comic book script was finally finished and then Mike Kennedy told the story in pictures.  His illustrations are beautiful, and I am so happy he took on this role.  Thank you, Mike!

You can read Stone of Thor for free at https://okiecomics.com/ and if you want a paper copy they can be ordered from Okie Comics for $5.00.  It is a continuation of the first two books and uses the same setting and characters in a new adventure.

Thank you to Jeff Provine, Mike Kennedy, and A. I. Jones for their help in this book. And thanks to everyone who enjoys the lore of the park.  I couldn’t have done it without your support.

Peggy Chambers calls Enid, Oklahoma home. She has been writing for several years and is an award winning, published author, always working on another. She spends her days, nights, and weekends making up stories. She attended Phillips University, the University of Central Oklahoma and is a graduate of the University of Oklahoma. She is a member of the Enid Writers’ Club, and Oklahoma Writers’ Federation, Inc. There is always another story weaving itself around in her brain trying to come out. There aren’t enough hours in the day!
View all posts by peggylchambers →
This entry was posted in Uncategorized and tagged comic scripts, Glome's Valley. Bookmark the permalink.