Posted on February 10, 2019 by peggylchambers

In the early 1980s we traveled to Jamaica – and met a couple from Tulsa who became good friends. It was our first trip outside the United States, and we were not yet 30.  We left the kids with Grandma and embarked on a week-long island adventure.  Babes in Toyland.

Recently a long-time friend who I just reconnected with on Facebook posted pictures of their trip to Zimbabwe.  It rang some bells for me.  I too, had to post a picture. We journeyed 8000 miles in the year 2000 – yes 19 years ago. It was a dream of my husband’s since he was a boy.  I was amazed at the culture, animals and kindness of the people we met.  It was the first time I’d crossed the Atlantic.

After my husband’s trip I said I wanted to climb the pyramids on the Yucatan peninsula. I’d read a book and seen pictures and since I doubted I’d ever make it to Egypt, the pyramids in Mexico were a good second choice.   I loved the trip and I climbed the pyramid at Chitchen Itza. Going up was not as frightening as the trip down. 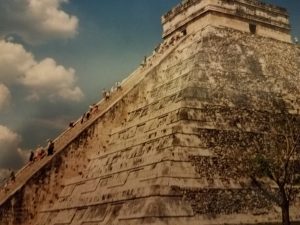 Then we decided we could fly to Hawaii and we went to the farthest island in the chain, Kawaii. I loved the quaintness of the island where there were roads that often were only wide enough for one vehicle at a time.  We took a helicopter ride to the center of an extinct volcano and viewed tiny waterfalls flowing under the road with children playing in the water. 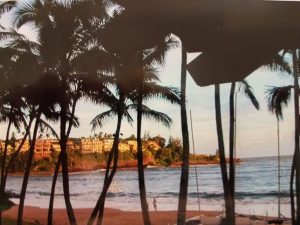 Lately we’ve been staying closer to home.  The older we become the slower we move.  But I’m getting restless.  Today is my 66th birthday and I’m ready for something exotic. We’re talking about Washing DC in the fall.  It can be exotic, especially during election time!  But I’m looking forward to the architecture.

Now that I’m retired and not making enough money for the trips I want to take, I could become a travel writer. You know, where they pay you to travel and write about it?  If my husband didn’t want to go, I could mail him a post card and check in on him and the dog now and then.

I think it is time for more adventures.  I don’t know how long I have to take advantage of them. Do you think anyone will hire me as a travel writer?  I long for adventure.

Peggy Chambers calls Enid, Oklahoma home. She has been writing for several years and is an award winning, published author, always working on another. She spends her days, nights, and weekends making up stories. She attended Phillips University, the University of Central Oklahoma and is a graduate of the University of Oklahoma. She is a member of the Enid Writers’ Club, and Oklahoma Writers’ Federation, Inc. There is always another story weaving itself around in her brain trying to come out. There aren’t enough hours in the day!
View all posts by peggylchambers →
This entry was posted in Uncategorized and tagged adventure, Ben Montgomery, Grandma Gatewood, Hawaii, Jamaica, travel, travel writer, Yucitan, Zimbabwe. Bookmark the permalink.

Leave a Reply to the #1 Itinerary Cancel reply