Posted on October 21, 2018 by peggylchambers 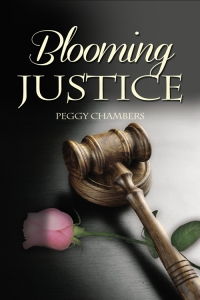 The first in the Keystone Lake Series, Blooming Justice is soon to be released.  Erin Sampson is a high school senior ready to start college – on a shoe-string.  Hard working and determined, she knows she wants to have more of a career than her mother. She wants to be a lawyer like her aunt.  And she thinks her hard work and determination are all she needs in life.

And then she meets Todd. His life hasn’t been wonderful, though to the outside world he has everything a young man could want. His scarred childhood has created a monster, one that cannot be tolerated.

Erin soon realizes bullies come in all shapes and sizes. They are everywhere, and you can’t let them ruin your life.  Sexually harassed at the senior prom, she plans to forget it and move on.  She wasn’t hurt, only humiliated – but it was just the beginning. In college – and at her aunt’s law firm where she works part time – she will have to find the strength to stand up for herself and others.

Here’s an excerpt from the prom:

And just like that his hand was on her butt.

Really? On a first date? Did he really think he’d get that lucky? The laughter from the other table increased – and then it hit her. The date was a show for his friends. She reached down and moved his hand back up. He backed up looking her up and down, then pulled her tighter, grinning, and sliding his hand down again. This time he grabbed a handful of ass as he dipped her backwards toward the table. The French twist felt heavy behind her, then the spaghetti strap on the gown popped. She felt her face flush, and he stood her back on her feet.

“What are you doing?” She yanked up the borrowed dress her face burning with embarrassment.

And the music changed to a fast tune.

She stood in shock facing her date holding the dress up on one side, her face on fire listening to the laughter. She suddenly knew the plan. Get the geek girl to fall for you so you can make fun of her, or worse.

“Need a pin, honey?” Sally Elkman asked with a smirk as she shoved past holding on to the hand of a boy Erin knew only as Train Wreck. Thrusting Erin out of the way, they pushed past leaving her to face her date. Todd grinned as he grabbed her again and twirled her around, then pulled her toward him.

Blooming Justice is a coming of age story about strength and endurance, friendship and love.  I look forward to introducing you to the first in the Keystone Lake Series, Blooming Justice in 2019.

Peggy Chambers calls Enid, Oklahoma home. She has been writing for several years and is an award winning, published author, always working on another. She spends her days, nights, and weekends making up stories. She attended Phillips University, the University of Central Oklahoma and is a graduate of the University of Oklahoma. She is a member of the Enid Writers’ Club, and Oklahoma Writers’ Federation, Inc. There is always another story weaving itself around in her brain trying to come out. There aren’t enough hours in the day!
View all posts by peggylchambers →
This entry was posted in Uncategorized and tagged bullies, flower shop, friendship, lawy office, love, rape, Sexual harrassment. Bookmark the permalink.