2018 Clearing Your Life: The Fear of Visiting the Phone Store

Posted on August 5, 2018 by peggylchambers 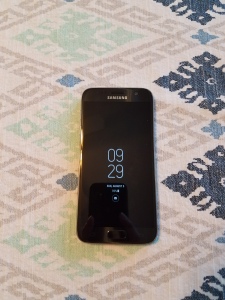 I cleared my life of an old phone this week.  I’m like an old dog with new tricks – trying desperately to learn something.

After weeks of struggling with phones that were worn out, shutting down mysteriously, not ringing when they should, my husband and I traipsed down to the phone store.  We always dread these trips, mostly because the people there don’t speak our language.  They are filled with millennials who look down their noses at old people who should just go away, since they don’t know what they’re doing.  And we were greatly surprised.

We’d already looked online (with the laptop, not the discrepant phone) at what was available and what we would be paying for it.  Two phones in a household can get expensive, but for some reason, we think we can’t do without them anymore.  I remember a time when my mother would put dimes in our penny loafers, so we could use a pay phone to phone home like E.T.  Here’s a picture of the new phone on the table cloth.  What exactly is a table cloth?  . . . I’m sounding old again.

We knew we didn’t need the newest and greatest that the phone companies had to sell.  We needed a reliable phone that would do what we needed and was newer than what we had.  The old ones lasted four years.  My husband has a friend with a flip phone that still works, but I doubt he uses it much.  He certainly doesn’t surf the web or takes pictures with it.

Well, at the phone store, we were pleasantly surprised.  The guy who helped us didn’t treat us like senior citizens he had to yell at and draw pictures to explain what he was trying to teach us.  He had one of the phones in-store and had to order the other, but it came in two days and then we made another trip back to the store. After all we had new friends there now and they couldn’t wait to see us.

And then the panic set in. The guy who sold us the phone wasn’t there.  A new one took on the old folks and he was a great as the first.  We’ve come to appreciate the customer service at A T & T in Enid.  They didn’t look down their noses nor did they try to make us feel stupid.  They were kind and a fountain of information.  This wasn’t as hard as we thought it might be.

We’re still learning the new phones.  They don’t shut off in mid use. We have new friends at the phone store and we can use the phones we’re paying for.  It is a win win situation.  We feel like we can function in society again. Thank you, A T & T.

What did you do to clear your life this week?

Peggy Chambers calls Enid, Oklahoma home. She has been writing for several years and is an award winning, published author, always working on another. She spends her days, nights, and weekends making up stories. She attended Phillips University, the University of Central Oklahoma and is a graduate of the University of Oklahoma. She is a member of the Enid Writers’ Club, and Oklahoma Writers’ Federation, Inc. There is always another story weaving itself around in her brain trying to come out. There aren’t enough hours in the day!
View all posts by peggylchambers →
This entry was posted in Uncategorized and tagged customer service, new phone, old people, phone store. Bookmark the permalink.