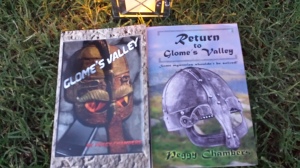 It’s summer and time for family vacations – and book sales! I’ve put the two Glome’s Valley books on sale in Kindle form for $.99 each for the rest of the month just in time for summer vacations.

If you need a family vacation that is within our great state, the best place in Oklahoma this summer is the Heavener Runestone Park for camping and family fun.

Located in beautiful southeast Oklahoma (10 miles south of Poteau) is the mysterious sandstone monolith with Viking runes said to have been carved before Columbus discovered what is now America.

The Heavener Runestone sits in a rocky valley as a testament to the one who carved it.  Maybe it was Glome.  The Elder Futhark runes say “Glome’s Valley” as if someone was claiming the valley for their own. Today the stone is encased in glass to preserve it and a park has been built around it.  Twice a year, the second weekend in October and April, the park hosts a Viking Festival to commemorate the Vikings that may or may not have been in the valley a thousand years ago.

My first visit to the park, I was entranced by the beauty and mystery of the area and those feelings led to an Oklahoma fairytale, Glome’s Valley.  I was visiting the gift shop when a man came in with a preschool boy and he wanted to see the book In Plain Sight by Gloria Farley.  Ms. Farley was one of the biggest proponents of the school of thought that Columbus was not the first European to land on this continent.  I overheard the visitor at the gift shop say he was a PhD candidate and he had his son with him as he studied the stone. I thought what a wonderful way for the boy to grow up with his dad studying the history of the area – and a story was born in my mind.

I wrote the first book for my grandson, who was in grade school at the time. In the story Ethan was hanging out with his dad for the summer, as Dad studied the Heavener Runestone, when he met the Viking ghost named Glome.  They had many adventures in the valley. Later I wrote the sequel, Return to Glome’s Valley, and by then Ethan had grown up to be working on his own PhD in archeology like his dad.

It is amazing as an author what sparks your imagination and makes the cogs turn as a story is born.  But sharing it with readers is as much fun as writing it.  Pick up a Kindle copy of Glome’s Valley and Return to Glome’s Valley for only $.99 each for the rest of July. You and the kids could read the books, written where Glome and buddies had their adventures, in the tent after dark. But if you miss the Kindle sale, the paperbacks are available at the park gift shop too.

Take the kids to visit the Heavener Runestone Park soon.  It is worth the trip.

Peggy Chambers calls Enid, Oklahoma home. She has been writing for several years and is an award winning, published author, always working on another. She spends her days, nights, and weekends making up stories. She attended Phillips University, the University of Central Oklahoma and is a graduate of the University of Oklahoma. She is a member of the Enid Writers’ Club, and Oklahoma Writers’ Federation, Inc. There is always another story weaving itself around in her brain trying to come out. There aren’t enough hours in the day!
View all posts by peggylchambers →
This entry was posted in Uncategorized and tagged camping, Glome's Valley, Heavener Runestone Park, Oklahoma fairytale, Return to Glome's Valley, summer vacation, Viking Fest. Bookmark the permalink.