Posted on June 3, 2018 by peggylchambers 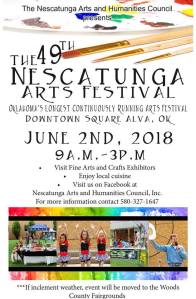 I was a vendor at the 49th annual Nescatunga Arts Festival yesterday. https://www.nescatunga.org/   It was a beautiful day on the downtown square in Alva, Oklahoma – not nearly as hot as Friday – though windy.  My daughter and I set up the canopy and then anchored it against the Oklahoma wind with four, gallon jugs of sand.  Otherwise the canopy might have ended op on top of the courthouse.  But we managed to keep the canopy upright. 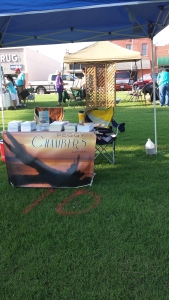 The day was lovely.  The small town of Alva has been having this festival for 49 years and they’ve got it down.  There was live music all day long.  The sponsors came around offering coffee and doughnuts in the morning to the vendors.  Later in the day, they sent the Rainbow girls around to table sit for you in case you needed a break.  The grass on the lawn was like a putting green, there were small bleachers set up for the music and dancing on stage and three different tents sold food.  We opted for the Taco salad which was wonderful.  Later in the day, my daughter checked out the cookie tent and found they were 2 for 1 so they could shut down. 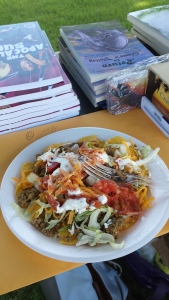 We were set up beside an African potter and artist.  They were from Tulsa with Etudaiye Pottery and Fine Arts.  I bought a lovely soap dispenser molded in the shape of an elephant tusk. Their art work was fabulous.  I wished I could have afforded more.

There were jewelry makers, leather workers, yard art and other things I didn’t get a chance to see.  My daughter made friends with a couple from Edmond – where she lives – that had paintings they made into t-shirts, mugs, puzzles, etc. 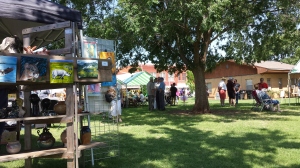 I saw old friends and made new ones as I talked about my books.  The day could not have been better.  You could even use the facilities in the courthouse instead of those blue port-a-potties (which might have blown over anyway).

I woke at 5 am to make the trip to northwest Oklahoma and then was taking down the canopy by 3 pm.  It was a great day and I can’t wait to see what they have planned for the 50th anniversary.  I know it will be great and I hope to be able to attend again.

First weekend in June – Nescatunga Arts Fest – put it on your calendar for next year.  Come to Alva for the fun, art and camaraderie.

Peggy Chambers calls Enid, Oklahoma home. She has been writing for several years and is an award winning, published author, always working on another. She spends her days, nights, and weekends making up stories. She attended Phillips University, the University of Central Oklahoma and is a graduate of the University of Oklahoma. She is a member of the Enid Writers’ Club, and Oklahoma Writers’ Federation, Inc. There is always another story weaving itself around in her brain trying to come out. There aren’t enough hours in the day!
View all posts by peggylchambers →
This entry was posted in Uncategorized and tagged Alva Oklahoma, art, Etudaiye Pottery, music, Nestcatunga, Oklahoma wind, paintings. Bookmark the permalink.