Posted on January 28, 2018 by peggylchambers 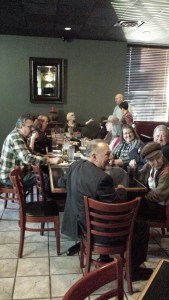 Last night was a blast!  I cleared my life of a lot of books, but most importantly I saw some of my best friends.  I had a release party for Stones of Sandhill Island and I sold out!  To those that didn’t get one, I am ordering more – or they are available on Amazon or Barnes & Noble.  Yes, contact me and I’ll sign them.

We had so much fun getting together and eating appetizers and talking.  Some knew each other, and some didn’t, but they quickly got acquainted.  Part of my family was with me upstairs at Callahan’s Pub and Grill as well as former co-workers, writing club and assorted friends. And after the party, a few of us remained to eat dinner together.

I plan to have more book signings for the new title – at the new bookstore in town, the library and maybe some other places.  But I guess it had to do with the bar atmosphere.  Everyone had a good time.  What was to be a two-hour party turned into three and I’m sure the restaurant was glad to get the tables back.  But several of us did order dinner afterwards.

The Wild Rose Press has lots of copies of the new book and so do Amazon and Barnes & Noble.  If you like, the electronic version is available with just a click of the mouse. The suspense novel Stones of Sandhill Island is the second in the Sandhill Island series set on a tourist island off the coast of Corpus Christi. It has a little romance and lots of surprises.  The main characters are new, but it still has some of the original occupants of the island.  I plan a third book.

Here is a small sample:

Why did she wait so long to open the box and why the big secret? She and her mother had a beautiful life together so what did it matter? But she wanted to know.

She fingered the matches as her heart once again ached. It felt like a new cut on top of an old wound that still had not fully healed. And the infection bubbled to the surface.

Billie lifted the ballet program from the hat box and carefully opened the brittle paper. She slid a finger down the list of principal dancers stopping on a faded picture of the woman that now inhabited the urn sitting in the living room. And the knife in her chest twisted.

The room swam, and she grabbed the bedspread like a drowning victim, twisting it in her fingers as she sat. The box and its contents slid off the bed and dumped unceremoniously on the floor. Billie could once again see the bonfire in her mind’s eye as she looked at the pile of mementos. She picked up the match book and carefully pulled a match from the cardboard and struck it on the outside – without closing the cover. It bloomed into a red, then yellow flame and quickly burned her finger, but not before catching the others in the book. She stared for a moment before realizing she had dropped the flaming matches into the pile on the floor. The tiny bonfire blazed.

Stones of Sandhill Island is available for purchase at https://tinyurl.com/y9qp6qzp

If you enjoy the book, leave me a review. Thanks to everyone who came to the release party.

Peggy Chambers calls Enid, Oklahoma home. She has been writing for several years and is an award winning, published author, always working on another. She spends her days, nights, and weekends making up stories. She attended Phillips University, the University of Central Oklahoma and is a graduate of the University of Oklahoma. She is a member of the Enid Writers’ Club, and Oklahoma Writers’ Federation, Inc. There is always another story weaving itself around in her brain trying to come out. There aren’t enough hours in the day!
View all posts by peggylchambers →
This entry was posted in Uncategorized and tagged Callahan's Pub and Grill, friends, novels, release party, sold out, Stones of Sandhill Island. Bookmark the permalink.