Posted on October 22, 2017 by peggylchambers 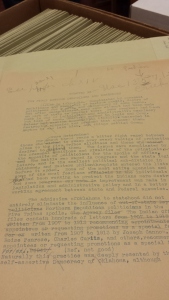 I viewed the original manuscript typed by Dr. Angie Debo for And Still the Waters Run at the OSU library this week.  It was her most controversial book and almost not published because of the content.

I spent Friday in Stillwater at OSU with friends and fans of Angie DeBo.  The One Book, One Community program through Oklahoma libraries had two tours of the Edmon Low Library where Angie Debo once worked.  A small group of people lead by Dr. Karen Neurohr toured the library.  We were led to the map library where she first worked and were privy to maps of the Oklahoma Territories, Indian Territories, Railroad maps and topographical maps that she once filed and kept for anyone needing research.

The Edmon Low library has a room dedicated to Oklahoma’s greatest historian with furniture from her home and first edition books written by her. 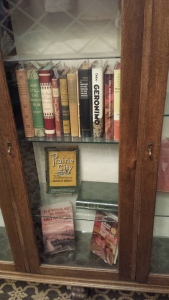 But the greatest gift I received that day was to look and – almost touch – the original manuscript for her greatest book.  In the basement of the library sits a tiny nook with boxes upon boxes of Dr. Debo’s work in file folders as she arranged it.  The curator pulled out one chapter – typed – with her hand-written edits and my mind flew to how the author wrote.  Today, I  write directly into the computer and then edit later by moving paragraphs, deleting scenes, running through spell checker and then giving it to my critique group to read.  That is the only time I print out my manuscripts, three pages at a time, to be marked on, given back to me and then tossed into the recycle box after changes are made to the computer document. She first, hand-wrote the document, typed it, edited it, typed it again and then sent it to a publisher.

As an author, I was amazed at the work. I was in the presence of greatness and I was awed.

Thank you Dr. Debo for all the research and writing you did about the people of the State of Oklahoma.

Peggy Chambers calls Enid, Oklahoma home. She has been writing for several years and is an award winning, published author, always working on another. She spends her days, nights, and weekends making up stories. She attended Phillips University, the University of Central Oklahoma and is a graduate of the University of Oklahoma. She is a member of the Enid Writers’ Club, and Oklahoma Writers’ Federation, Inc. There is always another story weaving itself around in her brain trying to come out. There aren’t enough hours in the day!
View all posts by peggylchambers →
This entry was posted in Uncategorized and tagged Dr. Angie DeBo, Edmon Low Library, history of Oklahoma, One Book One Community, OSU. Bookmark the permalink.