2017 Something New: Sunflowers and Hurricanes 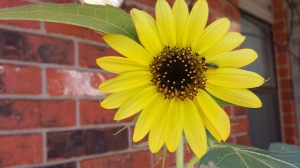 Meg’s solace in life is her home – and garden, and son.  The rest of the world can go away and leave her alone. The straight rows of vegetables are in direct contrast to the meandering stones leading to sunflowers and sea oats.  She functions fine by herself, making dinner from the food she grows while smelling her roses.  What else could she need? Well, her son thinks she needs a large city and a house that isn’t falling apart.

Meg and her son, Jon, were alone in the world for years after his grandfather died.  His father died before he was born. And that was fine. He and his mother were close.  But after he grew up, she went back to the island she loved when she was young.  Now he can’t protect her.

But when the secrets of Sandhill Island began to unravel, Meg opens herself up to Alex – the first man in a long time – just as hurricane season boils in the Gulf of Mexico.

Secrets of Sandhill Island, the first in the Sandhill Island series, is set on a tiny strand of land running next to Corpus Christi.  The only way on or off the island is by ferry; and that can be quaint.  Unless you need help.

Available in electronic format or paperback, Secrets of Sandhill Island is a great summer read.  Check it out and leave me a review. http://tinyurl.com/yasxweet

Peggy Chambers calls Enid, Oklahoma home. She has been writing for several years and is an award winning, published author, always working on another. She spends her days, nights, and weekends making up stories. She attended Phillips University, the University of Central Oklahoma and is a graduate of the University of Oklahoma. She is a member of the Enid Writers’ Club, and Oklahoma Writers’ Federation, Inc. There is always another story weaving itself around in her brain trying to come out. There aren’t enough hours in the day!
View all posts by peggylchambers →
This entry was posted in Uncategorized and tagged gardens, hurricane season, mysteries, new loves, sunflowers. Bookmark the permalink.