Posted on February 12, 2017 by peggylchambers

I needed to get out.  Friday was my birthday and I said I wanted a tour of northwest Oklahoma.  I needed to see the rolling hills of the prairie, the rocky canyons of Roman Nose, and the lakes of Oklahoma. We made a day trip, took the dog, and traveled from Enid, to Roman Nose, Canton Lake, and then back up to Salt Plains.  We made a stop in Fairview for lunch at El Maya (highly recommended) and then back home. The sun shone and the wind blew (it was Oklahoma after all) but for February, the weather was perfect.

I love the ruggedness of Roman Nose State Park.  We walked around and nearly had the park to ourselves.  Up one hill and down the next, we got a small workout. The dog was in heaven smelling every leaf.

I spent my weekends growing up at Canton Lake.  My parents had a lake home there and I lived for the water.  I found Canton changed since the last time I was there, but the water was still blue and the beach still sandy.  It’s February even though it didn’t feel like it this week, and I only saw one lonely boat floating in the small white caps.  My father used to fish below the spillway and it is now closed to the public.  Most of the trees on the Canadian side are gone and replaced with concrete pads for camping.  I can’t imagine how hot it will be camping there in the summer now. 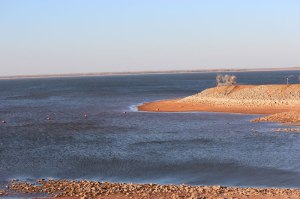 Salt Plains salt flats are closed during the winter.  We climbed the lookout and talked to some other people out to enjoy the weather then drove to the lake.  The dam was running and gulls floated on the water – more blue water. I breathed deeply.

Northwest Oklahoma is my home. My family moved here when I was seven for a job my dad thought would last a max of three years.  We’re still here. I’ve grown to love the diverse geography of Oklahoma.  From plains, to rocks, to hills, and lots of water. And getting out Friday was just what the doctor ordered.

What part of Oklahoma do you love?

Peggy Chambers calls Enid, Oklahoma home. She has been writing for several years and is an award winning, published author, always working on another. She spends her days, nights, and weekends making up stories. She attended Phillips University, the University of Central Oklahoma and is a graduate of the University of Oklahoma. She is a member of the Enid Writers’ Club, and Oklahoma Writers’ Federation, Inc. There is always another story weaving itself around in her brain trying to come out. There aren’t enough hours in the day!
View all posts by peggylchambers →
This entry was posted in Uncategorized and tagged Canton Lake, great outdoors., Northwest Oklahoma, Roman Nose State Park, Salt Plains. Bookmark the permalink.

2 Responses to 2017 Something New: Road Trip