Posted on January 15, 2017 by peggylchambers 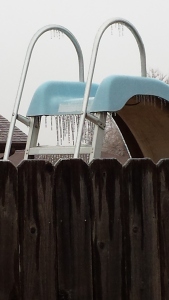 I remember the Enid ice storm in 2002.  We lost tree limbs, were without power for over a week, I came down with a respiratory infection, and my best friend died of cancer.  It was my birthday. The grocery store shelves were empty and lines at the gas station snaked into the street.  ATM’s didn’t work and stores allowed you to write a check. T-shirts were made for the survivors of that event.

When the weather forecasters began their doom and gloom reports this week I panicked.  I couldn’t do that again. They were wrong.  I knew they were!

My husband and I talked since that week years ago, about buying a generator.  But we didn’t because what were the chances of using it? That would never happen again.

Still the TV tried to frighten us into believing the end of the world was near. I bought food and ice melt. I made certain all the laundry was done before we lost power. I had lots of candles.  The fireplace was stocked. I talked about buying a bag of ice to put in the ice chest in the garage.  If the frig lost power, I could move the food to the ice chest. We would warm it up on the grill out back.  We’d done it before.  Instead I bought a large bottle of wine.  Maybe I could just forget the whole thing! (or not).

Friday came and we had rain. Saturday the same. This morning we have some ice covering that doesn’t even bend the tree limbs. Roads are fine. It rained in Enid with very little freezing. We needed the rain, not the icemageddon of 2002. I know not all the state has been so lucky.  People lost their lives on I-40’s ice-covered surface. My friend slid around going to the grocery store to feed her family after a hospital stay. We were lucky, but first we were scared. How did humans survive without central heat and lights?

The wine didn’t turn out to be very good.  I’m thinking of making a sauce for chicken. But, we are still warm and dry.

Peggy Chambers calls Enid, Oklahoma home. She has been writing for several years and is an award winning, published author, always working on another. She spends her days, nights, and weekends making up stories. She attended Phillips University, the University of Central Oklahoma and is a graduate of the University of Oklahoma. She is a member of the Enid Writers’ Club, and Oklahoma Writers’ Federation, Inc. There is always another story weaving itself around in her brain trying to come out. There aren’t enough hours in the day!
View all posts by peggylchambers →
This entry was posted in Uncategorized and tagged doom and gloom, ice storm, icemageddon, survival, weather forecast. Bookmark the permalink.