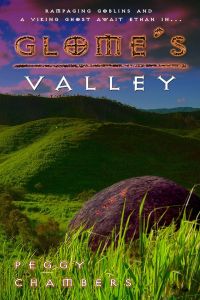 Ethan was bored.  Summer was for fun – and fun meant spending time with your friends.  But he had no friends in the valley.  Dad was trying to decipher the ancient writing on the runestone, and Ethan was trying to find something cool to do. Just another boring summer.

“We’ll have an adventure, just us guys,” Dad said.  Then Dad got busy.  So Ethan decided he had to find his own fun and he went for a walk in the forest of southeast Oklahoma near the Heavener Runestone – not realizing he was being watched.  And not realizing the ancient forest was full of magic and creatures he had never dreamed of.

Glome had been this forest longer than he could remember.  His Viking Dad long since gone.  He found friends in the tiny fairies that glowed in the dark, Bob the huge dog who lived in the forest, and the beautiful wood nymph that was imprisoned in the flower valley.  Together they fought an ancient battle against the trolls. And then a new friend arrived.

Ethan soon found himself surrounded with more adventure than he might be able to handle, and he had to keep it a secret.  After all, how would he explain to Dad that he spent his days playing with Viking ghosts, fairies and a magic sword.

When the adventure finally meant he had to sneak out without Dad’s permission to save the beautiful princess, Ethan found out that the forest was much different after dark and he would end up fighting for his life and his new-found friends.

Peggy Chambers calls Enid, Oklahoma home. She has been writing for several years and is an award winning, published author, always working on another. She spends her days, nights, and weekends making up stories. She attended Phillips University, the University of Central Oklahoma and is a graduate of the University of Oklahoma. She is a member of the Enid Writers’ Club, and Oklahoma Writers’ Federation, Inc. There is always another story weaving itself around in her brain trying to come out. There aren’t enough hours in the day!
View all posts by peggylchambers →
This entry was posted in Uncategorized and tagged fairies, Glome's Valley, Heavener Runestone Park, magic sword, Oklahoma fairy tale, trolls, Viking and Celtic Festival, wood nymphs. Bookmark the permalink.