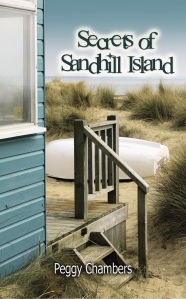 Meg lost her fiancé in a storm when he went out fishing alone.  He was desperate for money, a baby on the way, he had to go.  It was the last thing he told her.  But was it really a storm that took him?  Now years later, the baby is a lawyer in a very prestigious firm on the mainland and manages a large charitable trust.  Meg has moved back home where she grew up, on Sandhill Island.  It seemed like a good place to hide out from her past and do what she loved, garden.

But your past has a way of haunting you.  She never felt like she belonged in the society world of Corpus Christi where her father insisted she mingle.  But with is death, she had the opportunity to take his fortune – now hers – and do some good with it. The complete opposite of her father’s evil business dealings.

Then Alex entered her life.  Alex had a past too when he appeared next door to her vegetable stand.  At first he was a good neighbor who wanted to help her rid her garden of the rabbit that was making a banquet of it. But the relationship soon took another turn just as her son announced his wedding.  Then the sparks started to fly.  Meg thought she had remained anonymous on the island, but soon found out she wasn’t hiding – everyone knew who she was.  And then the blackmail began just as a major hurricane zeroed in on the tiny island.

Check out Secrets of Sandhill Island on Amazon or Barnes & Noble in paperback or e-published.  Summer is half over, but you still have time for another beach read even if it is read under the air conditioner!

Peggy Chambers calls Enid, Oklahoma home. She has been writing for several years and is an award winning, published author, always working on another. She spends her days, nights, and weekends making up stories. She attended Phillips University, the University of Central Oklahoma and is a graduate of the University of Oklahoma. She is a member of the Enid Writers’ Club, and Oklahoma Writers’ Federation, Inc. There is always another story weaving itself around in her brain trying to come out. There aren’t enough hours in the day!
View all posts by peggylchambers →
This entry was posted in Uncategorized and tagged beach house, beach read, blackmail, charitible trust, fisherman, romance, Secrets of Sandhill Island, suspense, vegetable garden. Bookmark the permalink.