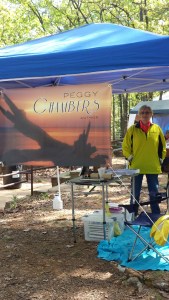 The legend of the area is that Vikings came down the east coast of what is now the United States a thousand years ago, rounded the tip of Florida into the Gulf of Mexico, up the Mississippi river and its tributaries to land in the beautiful valley of the Ouachita Mountains.  They carved on a heavy sandstone slab that still stands at the bottom of the valley.  The ancient runic Futhark language is not spoken today, which lends even more to the mystery of the place.  Some think the stone was carved naming the valley for Glome, the man who carved it, stating Glome’s valley.

My husband and I spent two days in the park set up as a vendor among many.  I sold my book, titled Glome’s Valley, alongside wonderful food trucks, blacksmiths, jewelry makers, sword makers, fabulous fabrics, and many other Viking inspired crafts.

There were loads of people at the festival, some in full Viking regalia, others with the kids and dogs enjoying the weather.  There may have been trolls.

We had a moth visit our tent most of Saturday and then finally fly away to freedom before it was stepped on. 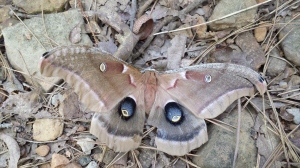 Plan to come down to the next one in October.  Bring the kids, dress up, (or not) and soak up the magic forest.  Breath deep the ancient legends and have a good time.

Peggy Chambers calls Enid, Oklahoma home. She has been writing for several years and is an award winning, published author, always working on another. She spends her days, nights, and weekends making up stories. She attended Phillips University, the University of Central Oklahoma and is a graduate of the University of Oklahoma. She is a member of the Enid Writers’ Club, and Oklahoma Writers’ Federation, Inc. There is always another story weaving itself around in her brain trying to come out. There aren’t enough hours in the day!
View all posts by peggylchambers →
This entry was posted in Uncategorized and tagged blacksmiths, festival, Heavener Runestone Park, Runestone, sword makers, trolls, Vikings. Bookmark the permalink.