Posted on October 12, 2015 by peggylchambers 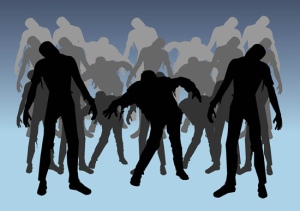 In part three the Russian mob arrives just as Jeremy gets his new anti-zombie meds. Will they work?

Martin Schumacher was a prosecuting attorney since he passed the bar.  He always knew he preferred prosecution to defense.  He would defend the good people of Nevada and get the scumbags off the street. Scumbags, like those creepy vampires and werewolves; and nastiest of them all, zombies.  He especially hated the ones who thought they could still be professionals when they were constantly licking their lips at you like you were USDA prime rib eye.  A good example was the attorney on the other side of his current case, Jeremy Littleton. He made his skin crawl.  Littleton was going down.

It didn’t take much to convince the Court Clerk to turn down the air conditioning in the courtroom that morning saying he had a summer cold and running a little temp.  And sunshine through the huge windows was a given.  Schumacher was certain the judge would soon notice the putrid smell coming off the defense attorney – everyone would.  Maybe they could wrap this case up by afternoon instead of dragging it out for three days.

He hoped to make Littleton sweat.  Did zombies sweat like real people? Who knew? He never saw so much as a drop on Littleton’s upper lip, even when he got nervous.  And he did sometimes.  The story was he was a mediocre attorney before he turned into an abomination.  But now he fought extra hard because of the stigma attached to his kind.  Why anyone would hire him now was the question that Schumacher always asked.  Who in their right mind would hire a zombie who might just turn and take a bite out of their client at a moment’s notice?

They stood at the tables when the judge returned from the lunch break and then sat down in unison, the sound of chairs scraping the floor.  The defense had the floor this afternoon with their so-called expert witness.  A man that Schumacher was certain he could break.  He knew virtually nothing about the witness, but if he worked for a zombie, how good could he be?

Littleton asked the normal questions of the psychologist about whether or not a bed had been secured for in-patient rehab, if Mr. Cummings was released into their hands.  At least the zombie had the good sense to make a plan in case he got the guy off.  Not that it would happen.  Then he started the pity party.  Poor man, his wife and daughter dead, flat broke, and then the gambling and drinking problems started.  Whiner!  Big deal, we all have problems.

“Your honor, the point of this trial is a DUI, not the death of the defendant’s family.  That is another case entirely.”

“It goes to the mindset of Mr. Cummings and why he acted as he did.”

“That is another case.” Schumacher gritted his teeth.  He hated even talking to this guy.

Like a shimmer of dust motes floating in the sunshine, Littleton’s assistant was suddenly at her boss’s side.  She was just as creepy as Littleton. She handed her boss a bottle of pills and nodded holding up two long, pale fingers.  He gulped them with a drink of water from the glass at the table. Then she silently left the room like she was never there to begin with. Was she one of them?  How could she move that fast?  No, zombies were slow movers. Vampires were another story, however.

It wasn’t instantaneous, but Jeremy could feel the drugs beginning to work.  It was sort of like the jump-start he used to get from a latte with a double shot.  He felt the life returning to his decaying body.  Eeewww.  He didn’t like thinking of it like that.  His body was not decaying – not yet.  He wasn’t dead until he said he was dead! And his mind began to whir as the room cooled to a chilly 60 degrees or less. He was certain Nadia worked her magic on the air conditioning system.

“Dr. Sweat, in your opinion, does my client, Dirk Cummings, show remorse for his actions?”

“And also in your opinion, does Mr. Cummings want to change and become a member of society in good standing again?”

“Yes, he does and he will be given that opportunity at Rose Hill.”

It was at that exact moment that Jeremy knew he was going to win this one.  He had his old spark back and even the client looked at him differently.  He shuffled his papers once and then stacked them on the table with a final whack.

“The Defense rests your honor.”  The courtroom was deathly silent. Then the gavel came down.

“Mr. Cummings, the Court has heard from the expert in this case and I am feeling a little generous today.  I am remanding you to the custody of Rose Hill for the duration of ninety days at which time we will re-convene and re-evaluate this case.”

“Your Honor!” Schumacher began.  “This is an abomination of the legal system. I haven’t had a chance to even cross examine the witness.”

“You’ll get your chance next time.  It’s freezing in here.  Something has to be done about that air conditioning!  We’re dismissed.”

Jeremy smiled at his client who still sat dumbfounded.  “What just happened?” he asked looking up at his attorney.

“You’re going to Rose Hill, Dirk.  You will get the care you need and begin to heal.  We all deserve a second chance and this is yours.  The Deputy will take you there immediately and you will be seeing a lot of Dr. Sweat.”

“Of course.  I’ll come visit you when I can and besides you will be back for reevaluation in ninety days.”

“You don’t know how happy this makes me.” He stood with his arms out and grabbed his attorney around the neck to hug him.  The closeness suddenly engulfed Jeremy.  He couldn’t remember when he had been the recipient of human contact, and then the almost uncontrollable urge to bite was forefront in his brain. He jerked back staring into the eyes of his client.

“Sorry.”  Dirk was turned around by the deputy, handcuffed and led off to Rose Hill for rehab. He looked over his shoulder once and nodded at the man who just kept him out of jail.

Jeremy stood at the table watching the client leave.  His state of euphoria dampened.  He may have won this battle but he was still a zombie.  Even if it felt for a moment like he was king of the mountain, he was still a rotting corpse.  Maybe the doc was right.  Maybe he did need a beer or two, with pretzels, just to celebrate the win. Maybe Nadia would like to join him.

Without a word, she leaned forward retrieving the papers and placed them in the briefcase cleaning off the table in one sweep of her long, pale arm. Jeremy jumped slightly and then stood in awe of her movement.  Her swiftness was an amazing blur of action and Jeremy had no doubt that everything was in its appropriate place.

“Ready?” She picked up the briefcase.

Jeremy was still standing with his mouth open.  He glanced at the opposing counsel’s table and wondered if anyone else noticed her movement, but they were deep in hushed conversations as Nadia packed the day’s work.

“Congrats on the win, by the way. Did the meds help you feel better this afternoon?”

“They did. They really did.  It was like a giant surge of energy and mental clarity I hadn’t felt in some time.  Thanks for picking them up for me.”

“Um, Nadia, I feel like celebrating – and the doc says I need more carbs – wanna get a beer or something?  My treat of course.”

Nadia turned slowly – more slowly than he had ever seen her move.  “A beer or something?  Like a date?” Her eyes scrutinized him.

“No!  No, not like a date or anything, just an office thing.  You know we deserve to celebrate, and then there’s the carb thing.”

“No, not a date.”  He tried to keep up with her swift movements.  He had practiced from the beginning not shuffling like a zombie.  The sunken cheeks made it obvious enough without the awful shuffle thing and keeping up with her was a help. She always got his heart rate up when he tried to match her movements.

“Okay then, if they have red beer.”

“What is with you and the tomato juice?”

“You don’t want to know.” And she blazed ahead of him.  He knew she would be waiting for him when he got to the office.

He stepped into the dark parking lot where now the air was warmer than the courtroom.  It blew over him and he sighed, not ready for the heat again.

The screeching tires announced the black sedan sliding to the curb.  Jeremy’s warming face suddenly felt the cloth held over his mouth that smelled sickly sweet.  He was roughly grabbed and thrown in the back seat of the sedan and held down by strong arms. He barely remembered struggling and then passed out.

Will Jeremy survive?  Can zombies die?  One more week  – the end is near!

Peggy Chambers calls Enid, Oklahoma home. She has been writing for several years and is an award winning, published author, always working on another. She spends her days, nights, and weekends making up stories. She attended Phillips University, the University of Central Oklahoma and is a graduate of the University of Oklahoma. She is a member of the Enid Writers’ Club, and Oklahoma Writers’ Federation, Inc. There is always another story weaving itself around in her brain trying to come out. There aren’t enough hours in the day!
View all posts by peggylchambers →
This entry was posted in Uncategorized and tagged bite, prosecuting attorney, Vampires, werewolves, zombie. Bookmark the permalink.