Posted on September 1, 2015 by peggylchambers

Dinosaur footprints from 65 million years ago are still visible in the river at Glen Rose, Texas (http://www.glenrosetexas.net/164/Convention-Visitors-Bureau).  I remember wading in that river and stepping in the imprints years ago when I was pregnant with my first child.  No, it was not 65 million years ago – even though it seems like it.  W trekked back to my husband’s roots this weekend to visit relatives we lost contact with over the years and they took us on a tour of their town.

Glen Rose is a town of about 2500 people set in the Texas hills southwest of Ft. Worth. 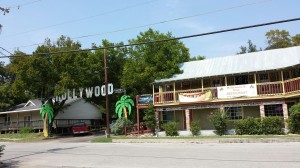 We took I-35 south and cut west around Ft. Worth to avoid Dallas on Friday evening about 5:00 p.m.  Never again! We spent more than an hour parked on a six-lane freeway.  Even the GPS got ticked off.  She kept telling us to turn left which would have placed us in the grassy median.  Then again, maybe that was a good idea.

But, the rest of the weekend was enchanting.  We once again became acquainted with long-lost cousins, their family and the town my husband spent many summers in as a child.  We were able to pick back up where we left off and enjoyed the time together. We ate too much (what is there about vacations?), laughed a lot, and met their children.  We promised not to let it be another thirty years before we connected again.

Glen Rose capitalizes on the dinosaur foot prints and other fossils found in the valley.

We visited the Creation Evidence Museum of Texas. They theorize that dinosaurs co-existed with humans several thousands of years ago, not millions.  The museum displays fossils, pottery, bones and a delicately created ark complete with animals.  You can see their information at www.creationevidence.org.

Traveling the easy way back home on Highway 81, we avoided the traffic in the Dallas Metroplex and arrived home much less tired than the first trip. We have to do this again.  Glen Rose is charming and so are her people.  I think even the dinosaurs would agree. I think I see a story here!

Peggy Chambers calls Enid, Oklahoma home. She has been writing for several years and is an award winning, published author, always working on another. She spends her days, nights, and weekends making up stories. She attended Phillips University, the University of Central Oklahoma and is a graduate of the University of Oklahoma. She is a member of the Enid Writers’ Club, and Oklahoma Writers’ Federation, Inc. There is always another story weaving itself around in her brain trying to come out. There aren’t enough hours in the day!
View all posts by peggylchambers →
This entry was posted in Uncategorized and tagged 65 million years ago, cousins, Creation Evidence Museum, dinosaurs, Glen Rose, TX. Bookmark the permalink.