A NEW BEGINNING: SPRING IN OKLAHOMA 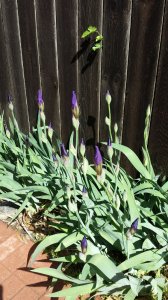 Another week has gone past and we are getting further and further into an Oklahoma spring.  I know because of the unstable atmosphere and also the amount of green in the environment.  My iris are about to pop and I’ve been able to use a few perennial herbs in cooking. And like the atmosphere, my mind seems to be wandering today as I write this blog.

It is the 20th anniversary of the Oklahoma City bombing.  Most anyone who has been around here for a while has a tie or two to that tragedy.  My daughter lived in Edmond while she went to school there but worked downtown at the time.  Luckily she had a test and was in her apartment when the blast shook pictures on her wall that morning – she was not at work when it happened.  Our state was changed that day as was the world when a home-grown terrorist attacked his own people.

Enid also has the distinction of being the hometown of Stephen Jones, the defense attorney for Timothy McVeigh.  Whether you agree or disagree, everyone has a right to representation and Mr. Jones was appointed by the courts to defend the most hated man in America. He did his job. I was a young paralegal at the time and fascinated at the idea of what Mr. Jones would learn in dealing with this situation all the while being repelled by what he had to do.  I wanted to join his team – and yet I didn’t.

I made a run to Oklahoma City yesterday and spent some time with the Oklahoma City Writers and attended their monthly meeting at Full Circle Books.  M.G. Miller also had a book signing in the book store and we all had lunch together.  It was a great day and a chance to hob-nob with some of the best writers in Oklahoma.  I deeply appreciate the OKC writers allowing me to spend time with them.

The phone rang this morning and a voice out of the past asks if this was Peggy.  My husband’s long lost cousin from Texas was in town and came by to visit for a while.  We had not heard from them in 30 years and we picked up like long lost friends.  It was great to see them and hope it doesn’t take another 30 years to get back together.

I had a new book come out this month and received my copies in the mail this week.  Glome’s Valley is a great little Peter Pan type fantasy set in southeast Oklahoma at the Heavener Runestone.  Pick up a copy and leave me a review if you enjoy it – or if you didn’t! (I know you will).

Pardon the ramblings today, but it has been eventful so far.  Just another Oklahoma spring.

Peggy Chambers calls Enid, Oklahoma home. She has been writing for several years and is an award winning, published author, always working on another. She spends her days, nights, and weekends making up stories. She attended Phillips University, the University of Central Oklahoma and is a graduate of the University of Oklahoma. She is a member of the Enid Writers’ Club, and Oklahoma Writers’ Federation, Inc. There is always another story weaving itself around in her brain trying to come out. There aren’t enough hours in the day!
View all posts by peggylchambers →
This entry was posted in Uncategorized and tagged Glome's Valley, long lost cousins, Oklahoma City Bombing, Oklahoma City Writers, Oklahoma spring, Peter Pan, Stephen Jones, Timothy McVeigh. Bookmark the permalink.