Posted on February 10, 2015 by peggylchambers

In keeping with my interviews of authors involved with Oghma Creative Media, I would like to introduce you to John T. Biggs.  John is a retired dentist who can really sink his teeth into a story.  In reading Popsicle Styx (note the spelling of Styx, like the river in Dante’s Inferno) it is obvious he has a penchant for twisting words. 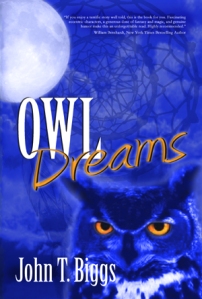 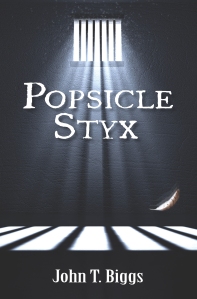 PC: First of all, John, tell us a little bit about you.

JTB: I’m originally from the little wedge of Illinois that fits neatly between the Ohio and Mississippi Rivers. All the men in my father’s and my mother’s family were coal miners but my parents decided to break with tradition and buy a junkyard—not exactly what you’d call social climbing but it’s a terrific source for fictional characters. I married the girl of my dreams when we were still in college and, against all odds, it worked. Margaret and I moved to Oklahoma in 1975 after I got a job offer at the OU College of Dentistry, and immediately knew this is where we were meant to be. I love the state. Everything I write is saturated with Oklahoma.

PC: What do you like to do when you aren’t writing?

JTB: I do a lot of travelling. My wife worked for 25 years as a travel agent and we built up quite a bucket list of places to go over the years. Laptops work with foreign and domestic current so I can write anywhere. I wrote, “Boy Witch” (the Writers Digest grand prize winner) on a trans Atlantic Cruise. I wrote sections of The Sacred Alarm Clock (The Oghma Book coming out in June) in Italy, Spain, and the U.K. Much of Popsicle Styx was written on road trips in the U.S.

When we’re not travelling, Margaret and I like ballroom dancing. We also work as docents in the Oklahoma City Museum of Art.

PC: Your latest book is Popsicle Styx.  Where did you get the idea for this book?

JTB: For a short time I worked as a prison dentist in Lexington Assessment and Reception Center, where every inmate in the Oklahoma prison system is evaluated and assigned. The inmates were a fascinating group of people, and more talkative than I had imagined. I actually started writing Popsicle Styx while I was enrolled in an E-Fiction seminar offered in Stillwater and taught by Bill Bernhardt. I was supposed to be working on another book at the time, but I met some Christian fiction writers and started thinking about what it would be like to be a Chaplain on Death Row. I hasten to add, Popsicle Styx is not a faith based book.

PC: What is your favorite piece you’ve ever written?

JTB: My favorite piece is always the one I am working on now. I’m currently doing revisions on an Oghma novel that should come out some time next year. I think the title will be What Kills You Makes You Stronger, but the publisher usually has final decision on that. I’ve been thinking about this book for a very long time. As part of my research I attended the Central Spiritualist Church of Oklahoma City. The characters and much of the language is taken from that experience.

PC: What would you call your writing style?

JTB: My stories are difficult to put into a genre, but I think my style is literary-mainstream. Almost everything I write could also be classified as Magic Realism.

PC:  Who is the publisher for your latest book?

JTB: Pen-L Publishing released Popsicle Styx. They will also be releasing another novel, (working title, Trial Separation). After that, Oghma will be releasing two more books Sacred Alarm Clock and What Kills You Makes You Stronger.

PC: You told me once you loved pulp fiction.  But that is not the kind of thing you write.  Why?

JTB: The first stories I started reading were in Fantasy & Science Fiction Magazine, and Analog. I love the feel and the smell of those magazines. I love the illustrations. I imagine black and white illustrations for every scene in every story I write. Pulp fiction has a significant influence, but my stories seem to have a mind of their own. I don’t have conscious control of the plots and characters once I get them started. Many of them start as pulp but wind up something else.

PC: What’s next on your agenda?

JTB: I’m going to rewrite the first novel I ever tried. The plot was somewhat lacking, but I love the characters and still think about them often. My writing style was undeveloped back then (15 years ago) and I think I can do much better now.

John’s books are varied, but there is an underlying theme of native American characters. I can’t wait to see what’s next.  Check out his books and as always write a review if you love a book.

Peggy Chambers calls Enid, Oklahoma home. She has been writing for several years and is an award winning, published author, always working on another. She spends her days, nights, and weekends making up stories. She attended Phillips University, the University of Central Oklahoma and is a graduate of the University of Oklahoma. She is a member of the Enid Writers’ Club, and Oklahoma Writers’ Federation, Inc. There is always another story weaving itself around in her brain trying to come out. There aren’t enough hours in the day!
View all posts by peggylchambers →
This entry was posted in Uncategorized and tagged bucket list, dentistry, John T. Biggs, Owl Dreams, Popsicle Styx, travel. Bookmark the permalink.

5 Responses to A New Beginning: Interview with John T. Biggs.