Posted on January 14, 2018 by peggylchambers 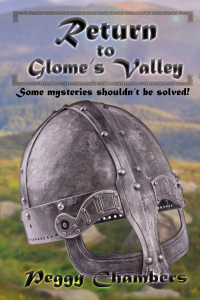 I’m clearing my life of unwanted clutter and offering up new and inventive ideas this year.

I’ve put out two new books in the last six months. Sometimes months of hard work on individual projects end up coming to fruition at approximately the same time and that is how it worked for me.

In the fall I released a fantasy YA book, Return to Glome’s Valley, which takes place in the valleys of southeast Oklahoma near the Heavener Runestone.  It is the sequel to Glome’s Valley and takes place 14 years later when Ethan has become a man.  He returns to the place he played as a child and finds escapades and secrets that only an adult could handle. Some mysteries should remain simply that. There are new adventures for some of the old characters and you might meet a dragon. It is available on Amazon at http://tinyurl.com/ybdsqr6w  and Smashwords https://www.smashwords.com/books/view/750678 in paperback or electronic download. 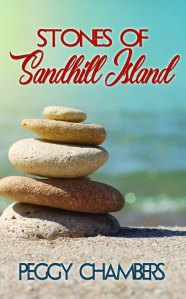 Stones of Sandhill Island is part of the suspense series that takes place on a tourist island off the coast of Corpus Christi. Billie Stone – a legend in the Corpus Christi jazz scene – has come home to heal emotionally after her family is killed in a car accident.  She struggles with PTSD and survivor guilt.  She meditates and practices yoga to help with the symptoms and then her anchor – her mother, a former principal ballerina with the Corpus Christi Ballet – becomes ill with Parkinsons. Then Billie finds her mother held secrets.

Others also suffer from that effects of that fateful night.  Joe Franks was a little drunk and never meant to hurt anyone when he hit the mini van that killed two people, but he spent a year in jail for manslaughter and lost his home, car, job, and self-respect.  Now he delivers pizza for a living and blames Billie for his troubles.

On January 24, 2018 I will release the second in the Sandhill Island series.  It can be pre-ordered on The Wild Rose Press site at  https://catalog.thewildrosepress.com/search?controller=search&orderby=position&orderway=desc&search_query=peggy+chambers&submit_search= or Amazon where the Kindle version is currently available for preorder https://www.amazon.com/Stones-Sandhill-Island-Book-ebook/dp/B078JYFSHN/ref=sr_1_2?ie=UTF8&qid=1515334460&sr=8-2&keywords=peggy+chambers. If you loved the first, I hope you continue the story with the second.  I plan a third as well and it is still a nugget in my mind.

A new year just begs for new reads.  Check out Return to Glome’s Valley and Stones of Sandhill Island and leave a review.  Authors love reviews!

Peggy Chambers calls Enid, Oklahoma home. She has been writing for several years and is an award winning, published author, always working on another. She spends her days, nights, and weekends making up stories. She attended Phillips University, the University of Central Oklahoma and is a graduate of the University of Oklahoma. She is a member of the Enid Writers’ Club, and Oklahoma Writers’ Federation, Inc. There is always another story weaving itself around in her brain trying to come out. There aren’t enough hours in the day!
View all posts by peggylchambers →
This entry was posted in Uncategorized and tagged ballet, Island Life, jazz, magical valleys, Parkensons, Return to Glome's Valley, Stones of Sandhill Island. Bookmark the permalink.