From the blog “Fish Wrap” by Andy Fish http://andyfishwrap.blogspot.com/:

He lectures on art related subjects and even has a painting in the collection of the National Gallery in Washington DC.

This blog will attempt to focus on all manner of art film and pop culture, but don’t hold much hope that it will stay focused.

He lives 40 miles outside of Boston, MA with his artist wife Veronica Lane Fish.”

I’m once again interviewing an artist that has made my book look wonderful. Andy Fish illustrated the cover of The Apocalypse Sucks and I had a few questions for him. He was kind enough to take the time from his busy schedule to answer.

Have you always been an artist and have you had any other jobs?

I worked for a lot of years in the grocery business where I worked my way up to a high level and well paid position and realized I needed to do something with art. As it was I was working ten hour days and doing art at night, I wanted to do art all the time.

What is the most exciting project you have ever worked on?

I’m always excited by the latest project I’m working on and looking forward to the next. The nice thing about this job is you never know what’s around the corner. I’m currently working on some really exciting things that I can’t talk about right now, confidentiality and all.

How long have you been affiliated with Airship 27 Productions?

I’ve been with the fine folks at Airship 27 since last Fall, I really love working with Ron and Rob and I think they’ve got some great titles in their bullpen. I’m a big fan of pulps so the idea of modern pulps is really right up my alley. I’m thrilled to be in the running for a Pulp Factory Award for my QUEEN OF ESCAPES cover.

Approximately how many book covers have you done?

Including comic book covers I’ve done hundreds. I’m primarily a graphic novelist so the idea of doing just a cover is very rewarding as opposed to a fully illustrated 120 page book. A cover is a breeze compared to that.

You illustrated the color cover for the outside of the book.  Zachary Brunner drew the black and white illustrations on the inside. Tell me the big difference in the two types of art.

Zachs illustrations were the visual inspirations and the first thing I saw before I even read the manuscript. I like his style a great deal, but I still approached this with my own take on what he had established. I thought it was important that my bat creatures at least were similar to what he had done. Working in full color vs black and white is an entirely different animal and one that creates a different approach.

Unlike the other covers I’ve done for Airship 27 I wanted this one to look more like a movie poster circa 1960s or 70s vs a vintage pulp cover from the 30s.

I love the way you drew Sandra and Molly for the cover of The Apocalypse Sucks.  If they were real, which would you choose for a relationship?

Ha! My wife is a stunning woman so the girls can’t hold a candle to her, although every brunette I draw owes something to Veronica so there’s that.

What’s next for Andy Fish and where do you want to go with your art?

I’m doing the interiors and cover for a new major Airship 27 book and as mentioned some amazing projects with some well-known people that should be out in 2014.

Well, whatever he does I know he will do it well.  Many thanks go out to Andy and Airship 27 for their help in making The Apocalypse Sucks a great book.  Check it out at http://www.amazon.com/Apocalypse-Sucks-Peggy-Chambers-ebook/dp/B00IGMRH4G/ref=sr_1_1?s=books&ie=UTF8&qid=1394939860&sr=1-1&keywords=The+Apocalypse+Sucks. 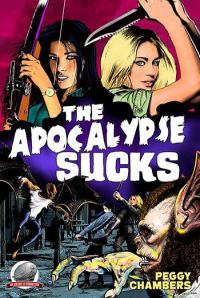 Peggy Chambers calls Enid, Oklahoma home. She has been writing for several years and is an award winning, published author, always working on another. She spends her days, nights, and weekends making up stories. She attended Phillips University, the University of Central Oklahoma and is a graduate of the University of Oklahoma. She is a member of the Enid Writers’ Club, and Oklahoma Writers’ Federation, Inc. There is always another story weaving itself around in her brain trying to come out. There aren’t enough hours in the day!
View all posts by peggylchambers →
This entry was posted in Uncategorized and tagged Airship 27 Productions, Artist Andy Fish, National Gallery in Washington DC, Queen of Escapes, Zachary Brunner. Bookmark the permalink.