My new thing for this week was a girl’s weekend in Tulsa.    I love my spending time with my daughter.  That is not to say, I don’t love my son, I do.  But, the relationship between mother and daughter is different.  For the last few years we have taken a weekend “girl’s trip,” no boys allowed.  My son would never do that – we have a different relationship.  This last weekend was our belated Mother’s Day Mother-Daughter trip.

We traveled to Tulsa and stayed at the Marriott Tulsa Hotel Southern Hills   http://www.marriott.com/hotels/travel/tulse-marriott-tulsa-hotel-southern-hills/  mostly for the spa and the fountains (or the martinis).

We scheduled massages early in the afternoon and I turned into a big bowl of pudding.  I was so relaxed my daughter had to remind me to pay!  At least that was my excuse.  We spent most of the rest of the afternoon shopping. Girls love shopping. 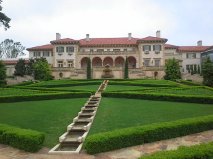 The following day we went to the Philbrook Museum http://philbrook.org/ which was featuring the Aphrodite exhibit.  I adore Greek and Roman art.   The museum itself was formerly the home of the Waite Phillips family; a 1920s villa situated on 23 acres of formal and informal gardens and has since been turned into a museum. I was in love with the architecture and gardens.  I have decided what my little brick ranch style house lacks columns.  You know big roman columns and maybe a fountain with statues in the middle.  I’m just sayin.’

I LOVE girl’s weekends!  What did you do this last weekend?

Peggy Chambers calls Enid, Oklahoma home. She has been writing for several years and is an award winning, published author, always working on another. She spends her days, nights, and weekends making up stories. She attended Phillips University, the University of Central Oklahoma and is a graduate of the University of Oklahoma. She is a member of the Enid Writers’ Club, and Oklahoma Writers’ Federation, Inc. There is always another story weaving itself around in her brain trying to come out. There aren’t enough hours in the day!
View all posts by peggylchambers →
This entry was posted in Uncategorized and tagged Aphrodite, daughter, girl's trip, girls weekend, Greek, mother, Mother's Day, Roman columns, shopping, son, Tulsa. Bookmark the permalink.

Best of the Midwest - Hiking, nature and photography

Inside the mind of an immigrant

All about healthy relationships

Sometimes you just need to read a good book.